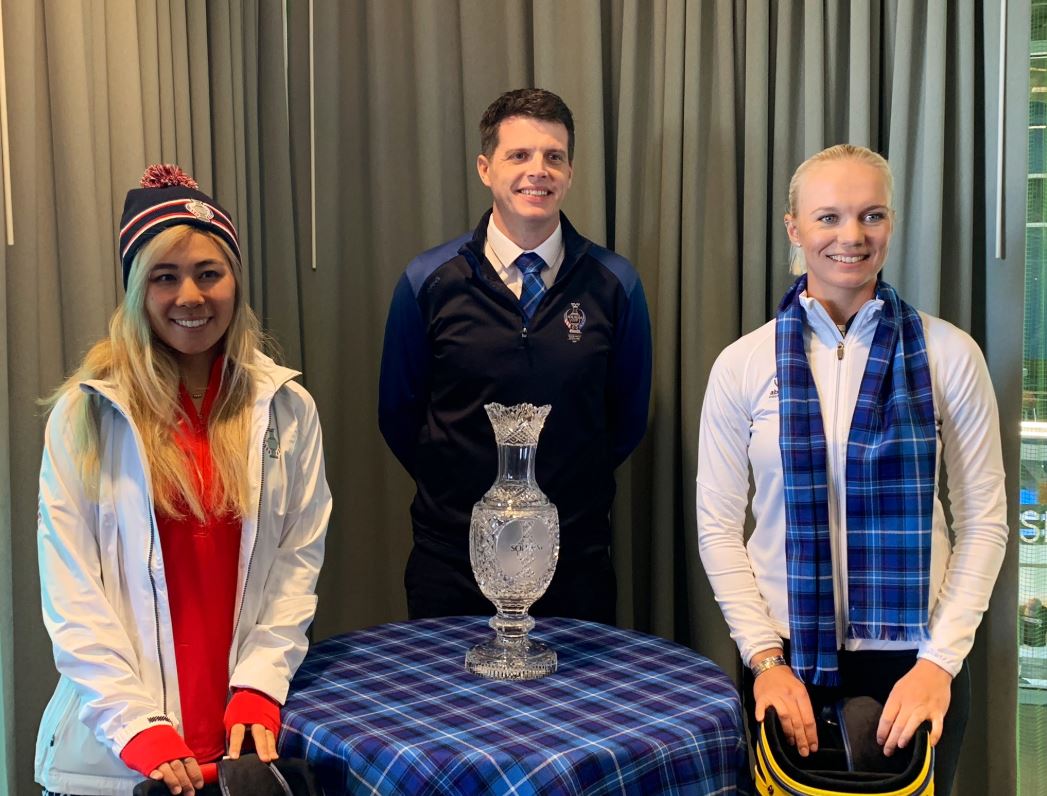 The Official Solheim Cup Tartan has been commissioned by VisitScotland and created by Lochcarron of Scotland, the world’s leading manufacturer of tartan, and comprises a blue, red, yellow and white design to mirror the colours on the flags of Scotland, Europe and the USA.

The unveiling of the tartan comes as both Team Europe and Team USA announce Abacus Sportswear and Jofit respectively as official team apparel suppliers for the 2019 match. The new tartan will be made available to both brands should they want to incorporate it into their designs, as well as featuring in a host of accessories as part of the official merchandise programme.

Alan Grant, Senior Golf Manager with VisitScotland, said: “Two things that are known around the world as being uniquely Scottish are tartan and golf so it made absolute sense to join the two together in celebration of The 2019 Solheim Cup being played in Scotland.

“Gleneagles and Scotland stand ready to welcome the European and US teams in September and while we know the matches will be hotly contested, they will also be conducted in the spirit of integrity and togetherness, which is signified by the team colours being included jointly in The Official Solheim Cup Tartan.”

Madelene and Danielle, who both made their Solheim Cup debut’s in Des Moines in 2017, were presented with tartan scarves to mark the unveiling of The Official Solheim Cup Tartan.

Danielle, a two-time winner on the LPGA including a debut Major win at the KPMG Women’s PGA Championship in 2017, said: “The tartan looks wonderful and it has really got me excited for the Solheim Cup in Scotland in September. It was amazing to be part of the team in Des Moines and it’s certainly a goal of mine to be on Juli’s team again this year.”

Madelene, who also twice successfully represented Europe as an amateur in the Vagliano Trophy, added: “It was a dream come true to play in the Solheim Cup in 2017 and obviously I would love to be part of the European team looking to win back the trophy at Gleneagles this year. Scotland is known for its passionate golf fans and it would be really special to play a Solheim Cup there, particularly with Catriona Matthew as captain in her home country.”

VisitScotland’s aspiration is that The 2019 Solheim Cup is the biggest ever European edition of the event with around 100,000 spectators expected at Gleneagles.